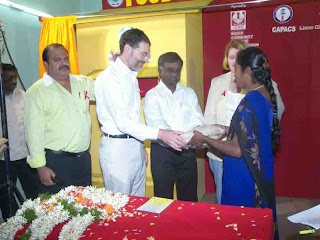 HIV/AIDS SCENARIO
As per National AIDS Control Organization’s (NACO) 2006 estimates, national adult HIV prevalence in India is approximately 0.36 percent, amounting to between 2 and 3.1 million people. If an average figure is taken, this comes to 2.5 million people living with HIV and AIDS; almost 50 percent of the previous estimate of 5.2 million.

In India, women account for around one million out of 2.5 million estimated number of people living with HIV/AIDS *. Their heightened vulnerability has both biological and socio-economic reasons. Early marriage, violence and sexual abuse against women are the major socio-economic reasons of their vulnerability to HIV infection. Their biological construct makes them more susceptible to HIV infection in any given heterosexual encounter.

Stop AIDS; Keep the Promise - Leadership
Since every 1st December has been observed globally as a day of action designed to raise public awareness on AIDS and to catalyze new and greater commitment against the pandemic, not just for one day, but for 365 days a year. WORLD AIDS DAY highlights up-to-date information on AIDS prevention and care. It aims to stimulate discussion and action among people not regularly confronted by AIDS and to spread messages of compassion, hope and understanding to every corner of the globe.

The theme for world AIDS day 2008 is “Leadership”. This theme will continue to be promoted with campaigning slogan, “Stop AIDS; Keep the Promise”.

Introduction about ICWO ;- Indian Community Welfare Organization is actively involved in creating, innovative and replicatable model in the field of STD/HIV/AIDS Prevention. ICWO’s previous innovative efforts were successful and appreciated through out the world.

As part of continuing innovative efforts ICWO is initiating a Food Bank for nutritional support for Women and Children living with HIV/AIDS on World AIDS Day on 30th November 2008.

FOOD BANK FOR WOMEN AND CHILDREN LIVING WITH HIV/ AIDS

It has become clear that nutrition will have to be addressed in the treatment of HIV disease and AIDS. In the focus-group discussions that we conducted, every group interviewed listed the lack of food as the most likely cause of nonadherence to antiretroviral (ARV) drug therapy. One participant succinctly stated, "If you give us ARVs, please give us food, just food." There truly is irony, not captured in the language of treatment advocacy, in providing antiretroviral drugs to populations that lack access to safe water or food.

The possibility that a relatively inexpensive intervention such as multivitamin supplementation could reduce the risk of or delay HIV-associated disease and death raises the question of how other basic interventions need to be integrated into our nascent HIV and AIDS treatment programs. PLHAs health needs extend beyond the treatment of HIV disease and AIDS; HIV-infected persons are at great risk from other threats, as well. For example, programs to prevent mother-to-child transmission of HIV will not fulfill their potential if ineffective maternal and child health services fail to prevent the many competing causes of death in women and children. 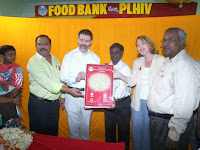 Innovative schemes will have to be developed to address the need for food supplementation within HIV and AIDS treatment programs. In addition to antiretroviral drugs, nutrition food could also be advised or "prescribed" by health care providers for HIV-infected patients and their families says Mr. A.J. Hariharan, Founder Secretary, ICWO.

ICWO has initiated a Food Bank for nutritional support for Women & Children Living with HIV/AIDS. ICWO is mobilizing support from the Corporate and philanthropists.

The generous support received from the Corporate and philanthropists will be used to purchase food grains for women & children living with HIV/AIDS. Every month the women and children would be support food grains.

The inauguration of the food bank is supported by CHENNAI CORPORATION AIDS PREVENTION AND CONTROL SOCIETY (CAPACS) and Lions Clubs International, 324A5. 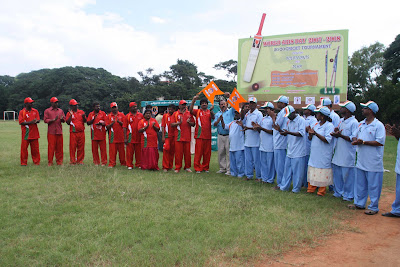 Indian Community Welfare Organization is actively involved in creative, innovative and replicatable model in the field of STD/HIV/AIDS Prevention. ICWO’s previous innovative efforts were successful and appreciated through out the world.
As part of the innovative efforts ICWO had organized a Cricket match for PLHA with the Political leaders in Chennai.
The event created an opportunity to discuss about partnership for leadership, stigma, discrimination, violence, marginalization, ill treatment, and denial of treatment, privacy, quality of life, access to the ARV treatment and Nutrition for PLHA
The cricket match was played between the political leaders and People living with HIV/AIDS. The cricket tournament strengthened partnership for leadership between the leaders and the PLHA.

Government of Tamil Nadu, inaugurated the 20/20 Cricket Tournament by batting the first ball and Mr. David T. Hopper, Consul General of United States of America bowled the first over.

Politician and PLHA team took an oath on care and support for PLHA, before starting the match. The Politician Red Team won the match. The Winner and Runner teams were taken in the Horse Chariot as a symbol of appreciation and encouragement after receiving the trophy and cups. 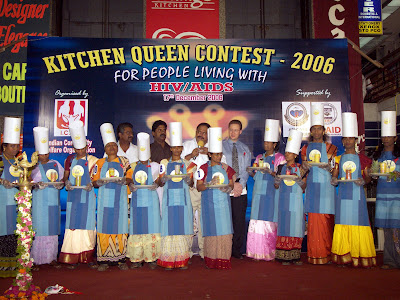 World Aids Day dates back to 1988, when an International Summit of Health Ministers called for a spirit of social tolerance and a greater exchange of information of HIV and AIDS.

Since then every 1st December has been observed globally as a day of action designed to raise public awareness on AIDS and to catalyze new and greater commitment against the pandemic, not just for one day, but for 365 days a year. WORLD AIDS DAY highlights up-to-date information on AIDS prevention and care. It aims to stimulate discussion and action among people not regularly confronted by AIDS and to spread messages of compassion, hope and understanding to every corner of the globe.

The World AIDS Campaign has named “accountability” as the global theme for World AIDS Day 2006. Thousands of campaigns around the world are preparing local and national events to raise awareness of HIV and to call on leaders to keep the promises they have made to tackle the AIDS pandemic

Dec. 1 is upon us. It has been 25 years since AIDS first hit the newspapers. No, AIDS has not gone away. Everyday there are 21,000 new infections in the world. What have we learned? Where are we going? Who will be next?

We have learned a lot over the past 25 years. We have new treatments, new ways to test, easier ways to test, no blood needed for the oral antibody test.

Free and confidential testing is offered through SHOUT OUTREACH, Gaudenzia, the Erie County Department of Health and many other community agencies. The answer to where we are going is anybody's guess. We still have the stigma associated with the disease and the attitude that it can't happen to me and the NOT so safe sex.

Who will be next? is a scary thought for those of us who work in the field of HIV/AIDS. Remember those 21,000 new infections daily. No, AIDS is still with us.
Maybe some day, Dec. 1 will be a remembrance day like Veteran's Day or Memorial Day instead of an awareness day.

This year's theme is "Stop AIDS- Keep the Promise-Save the Children". We need to think about World AIDS day. Do something positive. Get Tested. Remember, AIDS you can't give it back once you get it. 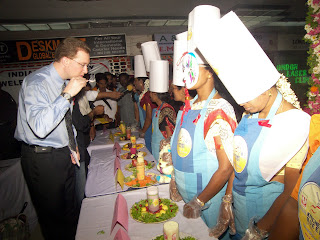 1. Nutrition plays an important role in the life of positive people

2. Nutrition helps the positive people to live healthier and longer

3. Nutrition helps the positive people to retain their stamina, strength

4. It helps them to continue their work and earn a livingCreate an opportunity for positive people to exhibit their skills in cooking 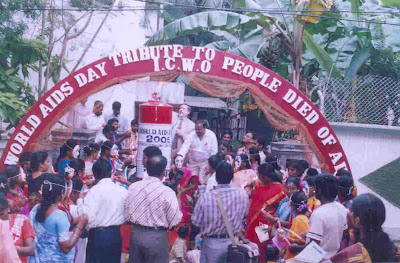 Around the candle there were volunteers from the sex workers community, MSM community and People Living With HIV/AIDS, they wore masks to express the need for the rapid intervention and pro- active role of the government, bilateral and funding agencies in stopping AIDS

The theme of this World AIDS Day -Stop AIDS. Keep the promise is an appeal to policy makers, program managers and project holders to ensure that they meet the target they have agreed to in the fight against HIV/AIDS 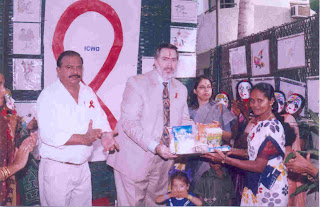 About the event
We Indian Community Welfare Organisation with the support of Action Aid and Women’s Collective Tamil Nadu have launched campaign against violence against women giving importance to the theme for the World AIDS Day is Women, Girls, HIV and AIDS.
ICWO involved 100 volunteers in the campaign in Chennai to reach 50,000 people. The volunteers are mobilized from among sex workers community, Homosexual men, Truck drivers, Industrial Workers, Auto rickshaw drivers, developmental workers. Dr. Jaya Sridharan being the chief guest flagged off the campaign.
The volunteers who started from Anna Nagar West and moved to T.Nagar, Saidapet, ICF, Central, Guindy and Koyambedu bus station distributing handouts and posters spreading the information on HIV/AIDS and need for support and care for the People Living with HIV/ AIDS.